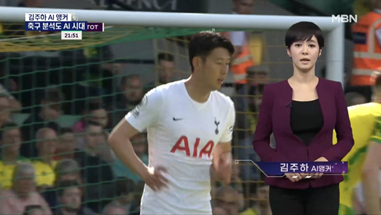 In this way, Football AI immediately displays various data on the screen, such as scoring patterns and routes.

It's an innovative automation technology that big companies in the same filed cannot even dream of having because they manually produce data one by one, with dozens of people dedicated to each game.

"Football AI generates about 1,000 data points per game. We can deliver those data to the smartphone in one second."

It can also be expanded to various devices such as AR and VR for virtual and augmented reality.

Football AI, which international media such as Bloomberg aired last month, is about to open the door of La Liga in Spain.

With Son Heung-min playing with the world’s best, domestic technology is also heading for the best in the world. This was Kim JooHa AI anchor.